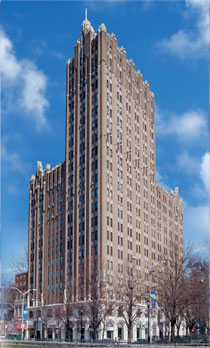 The Berger Organization, which acquired the 220,000-square-foot building in 2007 and spent another $5 million in upgrades, is offering free parking for new tenants as well as free hotel rooms and conference facilities at the nearby Robert Treat Hotel.

"We’re looking to do a longer term deal, but we’re looking to [offer] considerable concessions that other buildings haven’t given or can’t give," said Rich Mirliss, a managing director at Newmark.

Asking rents at the building are $21 a square foot, which around one-third the rent of most Class A buildings in New York. The rent is also less than the average in the state. According to Newmark’s fourth-quarter report, average asking rent was $24.29 per square foot in the Newark area and $26 per square foot statewide in New Jersey.

Mirliss said an engineering or law firm would make a good tenant, as the space is well suited for companies that need to house a lot of employees in a single space. Potential tenants include firms that have leases coming due in Manhattan or Newark-based firms that are looking to expand.

Tenants can access an on-site bank, newsstand, and printing center and have free use of a new fitness center.

The Berger Organization will provide one free parking space for every 1,000 square feet under lease. Additional parking spaces are under development.