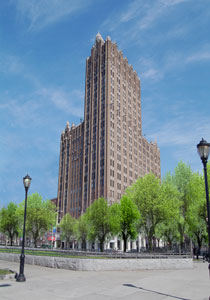 NEWARK, N.J., Feb. 18, 2011 – Fruit importer Pacific Group Holdings, Inc., known for its Bonita Bananas brand name, has leased 5,000 square feet for its United States headquarters at the Military Park Building, 60 Park Place in Newark, announced The Berger Organization, which owns the 250,000-square-foot, landmark office tower. The commitment caps a year of notable leasing success for the Military Park Building, which in recent months has welcomed five additional office tenants as well as three shops into a new ground-floor retail component at the property.

Pacific Group has relocated to Newark from Staten Island, N.Y. The Pacific Group’s Affiliated Companies owns plantations in Ecuador, from where it sources 100 percent of its fruit.

Other new tenants at the Military Park Building include:

“This activity is a positive sign for our property, the city and the economy in general,” noted Miles Berger, chairman and chief executive officer for The Berger Organization. “We are experiencing an upsurge in interest among tenants – some of which are relocating within Newark, with others coming in from elsewhere. With the expected near-term correction and our future return to economic viability, I firmly believe that Newark will thrive based on its location, excellent transportation infrastructure and affordability.”

The new shops – CityBeans Café coffee shop, Park Place Cleaners and Park Place News – reside in street-level retail space introduced at the Military Park Building this year to enhance its amenities for both tenants and the surrounding neighborhood. The addition represented the final component of a major capital update that also upgraded the property’s lobby, core building and elevators; and introduced a fitness center and conference room for tenants.